See a deer? Do not veer

NPR broadcast a story on Wednesday describing how white-tailed deer eat so much young vegetation they reduce forests to near-monoculture. A century ago they were rare on the East Coast; now they're multitudinous and voracious. Biologist William McShea described how a high wire fence, maintained for 21 years to hold deer at bay, shows us what we're missing.

People in West Virginia feel the impact of deer overpopulation. According to the Insurance Institute, that state's drivers are most likely to have a run-in (one chance in 45, in any given year). Hawaiian drivers have the least to fear from deer, with less than one chance in 10,000 per year.
Wisconsin ranks in the top ten for deer risks. Our family often sees the animals ambling near I-90 and I-94, but never so vividly as one evening two weeks ago on the way back from Chicago. I was at the wheel of our van. I glanced in the left rearview mirror to check on a passing semitrailer truck; then I looked forward. Behold: a mini-herd of four deer standing on the highway and the shoulder. I stepped on the brakes as the truck on our left dispatched one animal. Our van zipped between two other animals.
So we lucked out.
Nationwide, 1.5 million cars and trucks collide with a hoofed animal every year, mostly of the deer variety, leading to an average of 150 human fatalities.
Motorcycle riders are disproportionately at risk. Motorcyclists have deer collision rates ten times higher than what would be expected from the number of bikes on the road compared to cars.
Whistles were all the rage ten years ago. According to this bulletin
from the Insurance Institute for Highway Safety,

"The ineffectiveness of another approach — deer whistles attached to cars — has been proven. Available for more than 20 years, whistles produce ultrasonic noise (16 to 20 kHz) when a vehicle exceeds about 30 mph. The presumption is that deer will hear the noise and be warned away. It’s unclear whether deer do hear the noise, but in any event studies show the devices have no effect on deer behavior."

I was surprised to read that deer hurtle through a windshield only five percent of the time. If this happens the most common injuries are around the face. Major damage to the upper spine is possible.
There are cases of a deer passing completely through a car's passenger compartment: in the front window, out the back.
Odds of a deer collision are 30 times higher shortly after sunset than at mid-day.
Swerving at high speed in an attempt to drive around them is a dangerous tactic. It helps explain why almost half of deer-incident injuries come from the driver losing control and crashing the car, not from hitting a deer. The safest response to a deer ahead is to slow down while staying in your lane.
And wear your seat belt, given all the injuries and fatalities attributable to high-speed impacts and rollovers.
We drivers like to think that our vehicles are fully stable and under control at highway speeds. Yes, they appear that way most of the time, but stability can be lost very quickly, particularly for vehicles that have a high center of gravity (think SUVs) or that are towing trailers. I witnessed an example fifteen years ago. While driving along an interstate in the Twin Cities, a car entering from a ramp ahead of me clipped Car No. 2 at the front bumper, forcibly redirecting it to the left. Car No. 2 swerved and hit the median barrier with a cloud of dust and fragments. It bounced off and crossed all the lanes, barely missing Car No. 1.
As with many life-threatening emergencies, the best time to think and plan is well before the moment of truth. Many emergencies often leave little time for deliberation ... only reaction. Whether those reactions are productive or destructive depends greatly on decisions made earlier, plus smidgens of information gathered at the scene. So, decide now not to yank the steering wheel at 65 mph to avoid a deer. It's a bad idea.
Here's another example of why it's important to think about a course of action ahead of a crisis: the emergency called the sudden acceleration incident, in which a car seems to go crazy and accelerate into an obstacle or worse, a crowd.
The majority of SAIs are due to driver mistake -- stepping on the gas instead of the brake. Others could be caused by mechanical problems. But in any case it helps to know that a fast way to interrupt an SAI is to turn the car's ignition off or put the gear selector in neutral.
Posted by Jim Chiles at 6:44 PM 1 comment:

Stadiums and Storms: What's the plan?

Flying into MSP Airport from a meeting in Las Vegas on May 10, I snapped this picture of a big cumulonimbus over the Twin Cities: 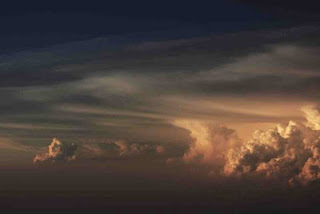 It was prime time for storm-shooting because clear skies to the west allowed the late evening sun to beam into the inner reaches.
When a cloud pileup has a cap like that it's called a cumulonimbus capillatus. I'd estimate the cloud tops at 45,000 feet.
After a half-hour hold, Air Traffic Control cleared us to land. On the glide path to MSP, I could look down to see our new Target Field ballpark, where the Minnesota Twins were in a rain delay, before losing to the Detroit Tigers.
The frustration started two hours before I flew by. Hearing the eerie wail of storm sirens, fans had fretted about a tornado or lightning. But the game went on until hail arrived. As chunks the size of golf balls landed on the grass, the announcer asked people to move to cover. Here's what I've distilled from the event:
Was there a tornado threat to Target Field that night? No. The Twins have an on-site meteorologist at all games, and he determined that no dangerous storms were on track for the ballpark. The sirens are a county-triggered method to alert a wide swath of residents about the possibility of storms. While it sounds spooky, a siren doesn't mean that a tornado is bearing down on the people hearing it. It means they should tune into weather reports and be prepared to find shelter.
Did the ballpark let people leave, seek their own shelter, and then re-enter with the same ticket when the rain delay lifted? The Twins organization wants fans to seek shelter from storms inside the ballpark rather than sprinting outside to reach other buildings and parking ramps. Standard operating procedures were in effect: any fan wanting to leave and re-enter would have to have their ticket signed by an usher-team leader. That would have been quite a line.
Why did the ballpark management close the bathrooms on the upper concourse? To discourage people from trying to seek shelter in them. The upper bathrooms aren't protected by masses of concrete and steel like the lower levels are. Such a precaution probably seemed heavy-handed to those caught in the pedestrian jam and wanting to use the bathrooms ...
If people on the upper levels were to go down to lower levels, why did the ballpark management turn off the escalators that can take large numbers of people downward? To force more people into the jam on the lower levels with escalators would have risked a pileup.
What were fans supposed to do when the announcer asked them to seek shelter? Move into enclosed areas in the lower levels, including the main concourse. There's also a roomy service level below the concourse, completely ringing the stadium, and reachable by stairwells reserved for emergency use.
Post-storm, the official response was that 40,000 fans should be able to leave their seats and find shelter inside the ballpark within 12 to 15 minutes after the first announcement.
Hmm. Given what I hear about the pedestrian jam-up that night, more fan-direction is needed. The quarter-hour response sounds like something a computer model came up with, by assuming that fans will move like fluid in a pipe; that they're highly cooperative and thoroughly familiar with storm plans.
Instead thousands jammed into the main concourse so tightly that even those that knew to head for the service level couldn't make much progress.
But the good news is that -- unlike a lot of older venues -- Target Field was built with storms in mind, so the hardware is in place.
Posted by Jim Chiles at 1:38 PM 1 comment:

Super 8: Crashing into a movie theater near you

New footage is out for Super 8, leading up to the June 10 theatrical opening. We are told a little more footage from this close-wrapped production will be released tonight at the MTV Movie Awards.

This website has a clip from the train crash. It's a reverse angle of the ad that aired during the Super Bowl. (I linked to that ad here.)

So now we know that the teens at the center of the movie are filming a scene for their zombie movie at an old train station in the town of Lillian, timed to use the passage of a freight train for ambiance. Then, a few hundred yards past the station and in the middle of their dialogue, the train derails.

Alarmed by a chain-reaction effect in which the point of derailment moves backward, causing freight cars halfway along the train to go off the rails at the station itself, the kids sprint for cover. In the confusion the camera flops onto its side, aiming at the wreckage. This found-footage is the plot device that pins the teens to the action.

The term Super 8 refers to an Eastman Kodak brand of 8mm movie film. See this Popular Science article from 1965, the first year it went on sale. Super 8 film stock is the same width as standard 8 mm, but the perforations are smaller. Kodak used the freed-up space to expand the image and also leave room for a sound stripe. Kodak first put sound-striped film stock on the market in 1973. See this Popular Mechanics article about the "revolution."

As depicted in the movie, the user could slap in a cartridge and be yelling "action" just seconds later. Standard movie cameras, such as the Bell & Howell 16mm camera I played around with, required the user to open up side of the camera, mount the reel of fresh film, and feed a leader through a sprocket drive to a takeup reel, making sure there was enough slack in the loops to avoid the sprocket gears stripping out the perforations. Depending on the speed chosen in frames-per-second, a cartridge with 50 feet of Super 8 film stock allowed two and a half minutes to three and a half minutes of shooting. Here's a shot of one of the actors holding up a developed reel. Though VHS and subsequent videocameras blew up the home market for Super 8 film and cameras, Super 8 was a fine system for its day and much more commercially successful than Polaroid's Polavision instant-movie system, remarkably innovative but also remarkably ill-timed given the rise of affordable, capable home video.

Some low-low budget filmmakers actually shot entire features in the Super 8 format after the sound-striped version was available.

I'm predicting the JJ Abrams movie will do well, particularly given the lame competition this summer.  Or maybe I just like the trains 'n aliens genre!