Every Wreck Has Four Corners

As History Channel-watchers may have gathered from the ads, tonight is Titanic night. I participated in one of those, Titanic at 100: Mystery Solved. It gave me a chance to meet long-time Titanic experts Parks Stephenson, Ken Marschall, and Bill Sauder. Here's a promotional photo from History that the NYTimes used in its wrapup of the weekend's Titania-mania programs. 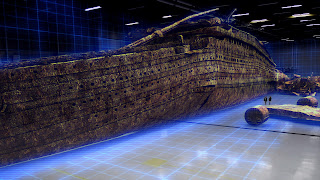 I'm the tiny dot above the boiler, standing with Ken in a "virtual hangar." Lone Wolf's crew filmed the segment in November with a Red One camera on a crane in a real hangar at a former naval air station in Brunswick, Maine. Edgeworx Studios did the special effects.

I always prepare my own set of briefing notes before heading off to help in a documentary, and the purpose of this post is to give a little background about one of the terms highlighted in my notebook, the "four corners" of a site. If a principal investigator says that her team has found the four corners, it can mean that the team knows the location of all four extremities of a plane: nose, wingtips, and tail. Or she can mean that the team has identified all material of interest, wherever it landed.

It's possible for important pieces to land quite far from the main body of the aircraft, so in such cases it wouldn't be enough to confine work within the polygon marked by the two wingtips, nose, and tail empennage.

One such case is the broken fan disk from the No. 2 engine on Flight 232. Because that engine's catastrophic failure had cut hydraulic lines that led eventually to the crash landing at Sioux City, finding pieces from the fan disk was critical to identifying the root cause.

Three months passed. Then a farmer found the fan-disk pieces in his cornfield near Alta, Iowa, 55 miles east of the crash site. The fan disk had fallen from the plane in flight. It was so important the NTSB worked up a debris map specifically for this assembly: 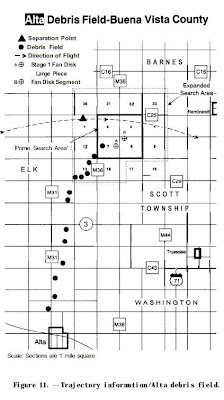 When an airliner crashes, a process begins that can take well more than a year to complete. Here's a profile from Popular Mechanics explaining how the NTSB tackles a light-plane crash.

Top priority is locating and rescuing any survivors, followed by recovery of human remains and crash-site preservation, then marshalling of evidence.
That includes interviews with anyone having first-hand knowledge, locating and mapping physical evidence, preserving those pieces, and locking down relevant information whether paper or electronic. The latter includes:
Lately that evidence trail is likely to include ACARS transmissions (short for Aircraft Communications Addressing and Reporting System).
In the case of the Air France Flight 447 that crashed on June 1, 2009, the Airbus 330-200 had an ACARS unit that transmitted routine navigational fixes at regular intervals. It also sent a burst of telemetry in the final moments, reporting two dozen alarms going off on the flight deck.
Locating the crash site is a critical early task, and with very few exceptions this succeeds. In cases where no local information or signal from the aircraft pinpoints the impact, the first job is to identify the LKP, and anchor a search around that point on the map. LKP stands for “last known position.” Think of the LKP as the center of a bullseye. Searchers draw concentric rings around it, marked in nautical miles.
In the case of Flight 447, the last ACARS transmission was the best information anybody had on the LKP. Here's a diagram from BBC published in June 2009. The box labeled 0214 Greenwich Mean Time marks the LKP.

While the Airbus had emergency-locator radio beacons on board such devices don't help when a plane crashes far from shore. The heavy wreckage sinks, taking beacons with it. Locator radio frequencies don't transmit more than a few hundred feet through water, and the ocean here was 12,000 to 13,000 feet deep.
Given the LKP to go on, search airplanes located 51 bodies and large floating pieces of the Airbus within four days. Here's the tailplane: But the bulk of the wreckage, along with the digital flight data recorder and the cockpit voice recorder, had come to rest somewhere near the Mid-Atlantic Ridge. While most of world's spreading-zone ridges are deep underwater, part can be seen in Iceland:

This led to concern that if the wreck came down in such rugged territory, it might never be found.

The first phase of the search assumed it would be possible to locate the wreckage in the first few weeks by the Underwater Locator Beacons, aka "pingers." It failed. That was a puzzlement, because searchers should have had the benefit of acoustic pings for homing.

Pingers are bolted directly to the data storage units for the cockpit-voice and flight instrument recorders. And they're rated for 20,000 feet of depth and at least 30 days of acoustic transmissions.
The pingers are small cylindrical objects with self-contained batteries. They activate automatically on contact with water. Here's the typical setup: (Coincidentally, pingers were in the news a few months ago, because salvors at the Rena wreck site attached them to dozens of cargo containers likely to break off the deck before the crane could get at them.)
Searchers used deep-diving hydrophones, towed behind ships moving along a search grid, to listen for signals that should have been weak but detectable. Given that searchers knew the LKP, and also had a good idea of how much farther Flight 447 could have flown from that point, there was optimism about picking up the pings if they moved quickly enough.
Except that no pings were heard, ever. Could ocean currents have carried the wreck a considerable distance? Though data on deep currents at the time of the crash was in short supply, perhaps computer models could fill the gaps. The French investigative agency, the BEA, convened a Drift Committee to estimate the net effect as wreckage passed through different layers.

Meanwhile another theory posited that the pilots might have turned around and headed the plane to Brazil, and therefore the LKP was a blind alley.
Two more phases of the search followed, using increasingly sophisticated side-scanning sonar. Still no luck; there was some doubt now that the wreckage would ever be found. So in July 2010 BEA had the scientific analysis firm Metron of Reston, VA, take a fresh look at all the sweeps to date, and all the signal returns.

Metron used a tool that I strongly recommend techno-watchers become more familiar with: Bayesian inference. Having heard about its use in a wide variety of settings, I believe Bayesian inference (in the right hands) can help society manage risks from complex, high-energy systems. Not eliminate the risks, but manage them. It does this by modifying old thinking with new information. Rather than forming a single idea and sticking to it (a pattern I see a lot), Bayesians continually refine their knowledge of the world. As long as everything ties back to the real world, and all homework is shown, Bayesian inference can be a very powerful tool.
Back to our story. In January 2011, Metron reported back to the BEA: while searchers had reasonably concluded that the wreck must be far away from the LKP (because the pingers hadn't been heard near the LKP, and surely pingers wouldn't fail), the Bayesian approach suggested the pingers might have failed even so, and side-scanning should pay more attention to the immediate vicinity of the LKP.

Metron singled out several targets of what appeared to be man-made objects. These had not been fully investigated during early searches.
Armed with this insight, the search fleet went back to the site for a fourth attempt to find Flight 447. Side-scanning autonomous subs found the wreck within a week, and very close to the LKP.
As tagged with photos and published in the 2011 BEA report, the wreckage was laid out like this:

Note that the field was fairly compact. This confirmed that the plane did not break up in midair. Rather it hit the water at high speed.
Besides assisting in the hunt for the long-lost wreckage of 447, two autonomous sonar-subs owned by the Waitt Institute (dubbed Mary Ann and Ginger) were key players in the 2010 survey that re-imaged Titanic and eventually led to the History Channel show "Mystery Solved" show tonight.

Here's a Waitt Institute video showing the Remus 6000 subs in action. Here's an info-sheet from Kongsberg Maritime, which builds them in conjunction with Woods Hole. And here's the deep-diving Mary Ann herself: