Tales of the Chopper: Firefight at FSB Ripcord, 1970

Here's another helicopter story from my social history of helicopters, The God Machine. This year is the 45th anniversary of the fight for  Fire Support Base Ripcord, the last major battle in Vietnam fought by American infantry.

By April 1970 "Vietnamization" of the war was well underway. One spot of ground caught between the U.S. Army's old offensive style and its new deference to South Vietnamese allies was an American artillery base operating on a steep-sided hill in the northwest quadrant of South Vietnam, noted on tactical maps as FSB Ripcord.

It was a remote and roadless area, twelve miles from Laos, and too small for an aircraft landing strip. Helicopters were the only way in, and would be the only way out.

Until the last weeks of June 1970, Ripcord appeared to be a viable strong point for executing Operation Texas Star, a series of patrols and forward artillery bases to block the movement of North Vietnamese supplies from hidden storehouses in the A Shau Valley.

Something like a vast warehouse you might find at the end of a rail line, storehouses hidden throughout the A Shau received supplies via a major branch of the road called the Ho Chi Minh Trail. American forces had given up on trying to take and hold the A Shau itself. An assault on the A Shau in April 1968 called Operation Delaware resulted in ten helicopters shot down in a single day, and twenty-three damaged.

But perhaps the movement of North Vietnamese supplies from the A Shau storehouses, which flowed east to enemy forces on the coast, could be choked off without a frontal assault; at any rate, this was the aim of Operation Texas Star. Once Texas Star was well underway, the Third Brigade, 101st Airborne Division hoped to hand the fighting over to ARVN troops in the spirit of Vietnamization.

It would never happen. Ripcord had 200 troops of one battalion on hand on July 1, 1970, when nine battalions of North Vietnamese began carrying out orders to wipe it out, along with every perimeter camp held by American patrols.

The NVA plan was to reduce the base’s defenses with barrages of heavy mortar fire and nighttime sapper attacks. Anti-aircraft guns dug into nearby hillsides would shoot down helicopters offering assistance. These hillsides were so steep that the Air Force would not be able to use B-52 bombing raids to dislodge the attackers. Then the NVA would overrun the hilltop. This would remove the threat to the supply lines running out of the A Shau Valley and probably hasten the Americans’ exit from Vietnam.

The NVA's grand plan, encircle and choke, was on a smaller scale but otherwise much the same as had annihilated French forces at Dien Bien Phu in early 1954. Ripcord was even more isolated than Dien Bien Phu, which didn't bode well for the Americans.

Dien Bien Phu was an obscure village 175 miles west of Hanoi, near the Laotian border, when the French Expeditionary Corps decided in late 1953 to dispatch paratroopers to open up a stronghold there. Gen. Vo Nguyen Giap identified the destruction of the base as his best opportunity to break the enemy’s will. Using diversionary attacks all around the country to disperse the under-strength French forces, Giap’s Viet Minh forces cut the supply lines to Dien Bien Phu and waited for monsoons to shut down French air support. Then Giap attacked in force in March 1954, broached the defenses by digging trenches and tunnels, and launched a final human-wave attack that prompted a mass surrender. It's still studied in war colleges.

The fort at Dien Bien Phu had take months to reduce, and similarly NVA troops had prepared for a long battle at Ripcord by digging log-reinforced bunkers into the steep hillsides. Deep tunnels connected many bunkers, so North Vietnamese troops could move to the best firing points without getting hit. They hoped their DShK heavy machine guns and the frequent low cloud cover would keep gunships away.

The shooting began on July 1. After two weeks, American forces at Ripcord were holding on but wearing down. 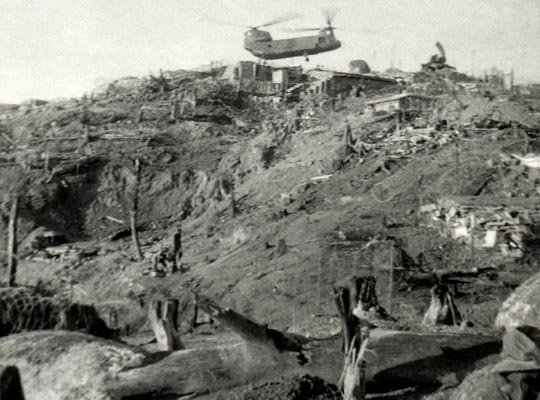 Disaster looked certain after a spectacular mishap on July 18, when Vietnamese machine-gun fire from across the valley brought down a Chinook helicopter that was hovering over an ammunition dump. The helicopter crashed on top of its sling load of ammunition, caught fire, and triggered the entire cache in a spectacular series of thunderous blasts, fuel-air fireballs, and smoke trails.

The mayhem lasted for eight hours. While still under attack from NVA gunners outside, the troops had to dodge fire from inside as well: from their own cluster bombs, white-phosphorus rounds, grenades, artillery shells, and clouds of tear gas. The chaos also destroyed a battery of 105mm howitzers.

On July 22 the word came: a daisy chain was going to try to evacuate the troops, plus any equipment they could salvage. Gen. Sidney Berry, acting commander of the 101st Airborne in nearby Camp Eagle, had some misgivings when he wrote his wife that morning: “The mountains seem loaded with 12.7mm AA machine guns. Yesterday, we had two more helicopters shot down.”

Following an overnight bombardment of the base perimeter intended to discourage the enemy gunners, fourteen CH-47 Chinook helicopters launched before dawn.

At the base they began hoisting everything of military value, including unwrecked howitzers, radar sets, and two bulldozers. Evacuation of troops began at 8:30 am. Mortar fire increased as the North Vietnamese realized that the foe was trying to slip away. Orders directed NVA squads to overrun the base without delay.

Using a nearby waterfall as a reference point, UH-1 Huey helicopters traveled a specific path, landed, and paused amid the exploding mortar rounds for excruciating seconds to let the troops board. The fire from the hilltops was so intense at first that troops were reluctant to leave the safety of bunkers and trenches to get on the Hueys. But they decided that things weren’t going to get any better.

Once loaded the helicopters turned and dived off the hilltop. The evacuation was over shortly after noon, at a high cost to the helicopter fleet (out of twenty Hueys used in the operation by the Ghostrider Company of the 158th Aviation Battalion, eleven were destroyed or damaged.) but with surprisingly few human casualties.


After the war Gen. Benjamin Harrison tracked down and interviewed several North Vietnamese commanders who had tried to overrun his forces at Firebase Ripcord, while researching a book on the battle. The retired enemies mentioned that the NVA feared American gunships in particular for the way they poured fire directly into bunkers dug into the sides of narrow valleys, where no other aircraft could touch them – not even the fearsome bombing runs by waves of B-52 bombers.
Posted by Jim Chiles at 6:10 PM